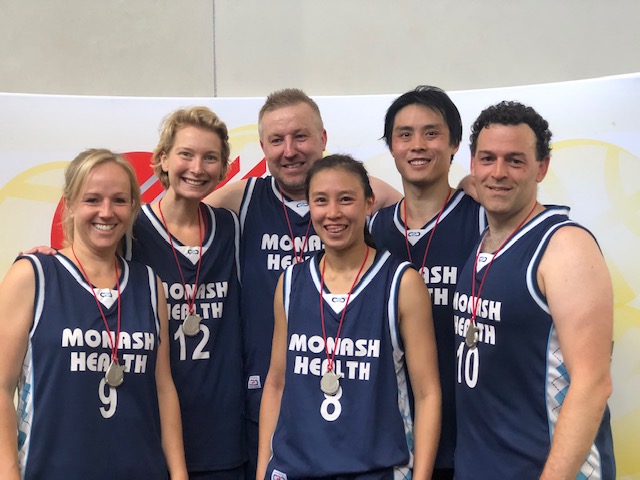 Posted at 1:47pm on 16 December 2019 in iNews, Latest news by Public Affairs and Communication

Monash Health’s Physiology and Exercise Physiology Basketball team win the gold medal at the 27th National Corporate Games that was held in in late November.

Our Physiotherapy and Exercise Physiology Basketball team calls itself Pickle’s Army, named after colleague and matriarch of the Physiotherapy department at Dandenong Hospital. They have been playing together for 14 years and until now, have only ever won silver at the National Corporate games. After a total of six games, Pickle’s Army not only won a gold medal but also received the overall Basketball Medal for the most points scored.

The wonderful players in Pickle’s Army are:

The National Corporate Games sees many organisations competing in a variety of sports to allow their employees to participate and pursue a more active lifestyle.

Congratulations to Pickle’s Army and best of luck to them on the court at the next tournament!


Previous Next
Close
Test Caption
Test Description goes like this
This website is for Monash Health employees. Please be mindful before sharing links.Learn more
+